Well, it was an amazing year for me. In 2007 I had my first Digg experience, continued to work on my photography, finished my second year at the Silver City Daily Press (before moving to Washington D.C.), and fell in love. Looking back, and reflecting on the current state of being, I’m pretty much living my dream life.

How did I arrive at this junction? Well, I guess there’s some value in examining the past in order to arrive at the present, so here goes. This will mostly be a review in images, but I’ll pull from the archives as well. I began the year with my new camera in tow, enjoying the freedom afforded by using my own equipment. I’ve argued before that I don’t do what it takes to really improve at photography/writing/blogging, but there’s been enough natural progression that I’m happy with my body of work in 2007.

Photos played a major role in my life this year — they gave me a better window into my world, and connected me with some incredible people. For example, here’s Mitch, a nice guy I met while shooting at Ben Lily.

January also marked my fourth year of traveling to Santa Fe to cover the New Mexico Legislature, a trip I sadly won’t be making in 2008. The legislative session in New Mexico is truly something unique to the Land of Enchantment, and I’ll miss the quirks, the politics, and everything else.

Also in January, Gov. Bill Richardson announced his candidacy for the U.S. presidency. I’m not sure things have turned out as he would have liked, but he did bring some national attention to the state and to some issues important to Westerners.

(Due to the size of this post, I’ve continued it after the break) February was a big month: it saw the final destruction of the Hillcrest Hospital, a long time fixture (or blight, depending on who you asked) of the Silver City skyline. A new Silver City-Grant County Chamber of Commerce director was hired, and after some digging I found Nicole had a past in the limelight. In addition, David Iglesias’ allegations regarding his firing kicked off the U.S. Attorney scandal, culminating months later in the resignation of Attorney General Alberto Gonzales.

In less important news, I attended Chocolate Fantasia with Meredith, who also adopted a kitten. Speaking of Meri, I found myself deeply in love with her. As coworkers and friends, references to her on this site have been varied (she’s often referred to as a colleague in earlier posts, and later, simply as “Meredith”) and I’m not sure how she feels about my mentioning her from time to time. Regardless, she’s an integral part of my life, and the best thing to happen to me in quite some time. This was a great month in the grand scheme of thing, but photography was especially amazing. I went on my first photowalk (though I didn’t know the term at the time), had some fun along the Gila River, and also in downtown Silver City. Meredith and I took a couple of trips as well: to Tucson (home of fornicating rattlesnakes) and the City of Rocks.

We made some new friends in March, Bear and Loon, a couple of travelers with good souls and warm hearts.

New Mexicans also saw the first indications that members of their Congressional delegation were heavily involved in the U.S. Attorney Scandal, and we saw further proof that the Bush Administration was working to systematically politicize the federal government. Ah, spring. I began the month in Albuquerque, of all places, on another quick trip with Meredith. We went to the Biopark and generally had a good time. Meredith also adopted a second kitten, Squishy, and the felines featured prominently on the blog in April.

We celebrated Stina’s birthday and the grand opening of the Curious Kumqat’s new digs, and witnessed a “shootout” downtown.

Also in April, I looked at the dynamic between blogs and traditional media outlets. Most of what I said then still stands true today, and my current gig only reinforces much of it. Controversy surrounded the Hurley Smokestacks in May, when the Gila Resources Information Project filed suit to halt their demolition.

At the beginning of the month I noted that one year had passed since Dusty Shuck was found murdered along a Maryland interstate. There was no new information regarding the case then, and I haven’t heard of any new leads since.

And, of course, the photos. Meredith and I went to the Catwalk, and she joined me on some photowalks downtown and at Fort Bayard. I’d quickly learn that she has an incredible eye for detail, and that taking pictures with her is one of my favorite pass times.

I was fortunate to receive a macro lens for my birthday, and I learned to “pan” action photos at the Tour of the Gila. I also participated in Jim Goldstein’s “Favorite Photos” project. I selected “Waiting” as my favorite, and described why. People called it the end of an era, and the demolition of the smelter smokestacks at Hurley was certainly an event. Thousands of people flocked to Hurley to watch the demolition, and it was surely a sight to behold.

Aside from the demolition, I continued with the photowalking, joining Meredith and our then-coworker Meghan on a trip to Turkey Creek.

I also made a trek to the border for a series on immigration enforcement. This was my final project for the Daily Press, though I didn’t really know at the time. The series bled over into July, but you can read the first segment here.

I also completed my last in-depth fire story for the Daily Press. My coverage of wildfires (and accompanying photos) won me two New Mexico Press Association Awards in 2006, and the topic always interested me. So, after considering what I wanted to do with my life and career, I packed up and moved to the Washington D.C. area. I’d previously considered Seattle (as had my sister) but the move I made was sensible. Meredith was moving to Baltimore, and my mom and sis both lived in or around D.C. Well, I had a blast watching the Legg Mason tennis tournament this year, with some incredible athleticism on display by the pros. I think Meredith was unprepared for the heat, but if I recall she enjoyed herself.

I also took note of the bursting housing bubble. Some (Atrios, Dean Baker) had been covering it extensively (another instance when the bloggers were ahead of the story) and I was happy to join in. I’m still interested in finding out how the lending crisis has effected southwest New Mexico.

Sadly, I noted the passing of Bob Johnson, a veteran journalist and the force behind the New Mexico Foundation for Open Government. Bob was an incredible mentor, and the principles he championed are vital to the work I’m doing now.

I also played a wicked game of hangman. I started a new job in September, with the Studio Theatre. While ultimately it didn’t work out, the experience was a good one and led to the creation of some lasting friendships.

Meredith and I toured Baltimore a bit, including Fort McHenry (an incredible piece of history) and the Clyburn Arboretum. She also took me to my first poetry reading. On the blog, I noted Bill Richardson’s continued gaffes on the campaign trail, and took a look at biofuels. November
While my official start date was in October, I didn’t begin working at the Sunlight Foundation full time until November.

I actually don’t have any photos to showcase during November. Yeah, I know.

Otherwise, we had a WNMU graduate asking questions at a presidential debate, a little bit of a venture into creative writing on my part. Not mentioned on the blog, but incredible nonetheless, was the Tegan And Sara concert I watched with Meri. Wrapping it all up was December. I’ve had an amazing month, and it was a fitting end to 2007.

I ran into Martin Heinrich, a candidate for the 1st Congressional District in this year’s election. I blogged recently on the passing of Sen. Ben Altamirano (more on that later this week) and just made it back to New Mexico for the holidays.

But the greatest thing was Christmas. It was an odd affair for the family, but with Meredith it was something beyond amazing. I can’t think of any other way of saying it, but it was the best Christmas ever.

Like I said at the beginning of this piece, I’m living the dream life. I have this wonderful girlfriend and I don’t think there’s a more perfect job for me than the one I’m working. I love living in the city, and being so close to my mom and sister is great. I miss New Mexico, but I know I’ve made the right decision moving away.

That’s all for 2007 â€” the blog will continue, and I hope you keep coming back to read the site and check out the photos. Best wishes to a prosperous 2008 for you and yours. 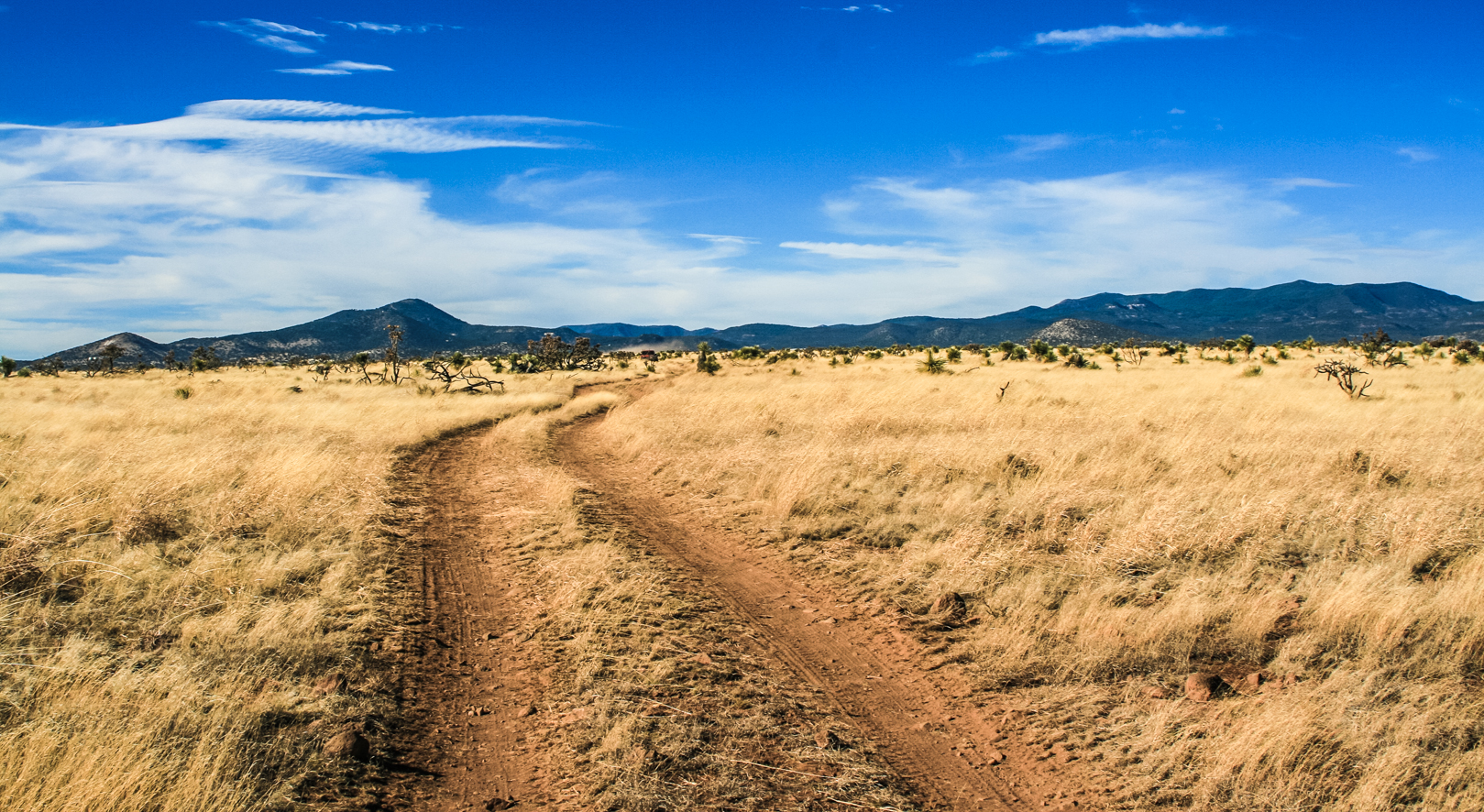